Man oh man,  our little man is not so little anymore. At his 18-month appointment last week (I know, I can’t keep up), he measured 34 1/4″ tall and weighed 27 lbs, 6.5 oz! Funny side story about Harrison’s recent well-check. We totally forgot to schedule it until I realized he was 18 months, for the past 2 weeks, and hadn’t been to the doctor yet. Fortunately, we live in a relatively small town, and his pediatrician was able to see him just 2 days after we called. Proud parent moment :).

Harrison is doing so many new things on a daily basis, that it’s hard to keep track. Let me attempt a short list. 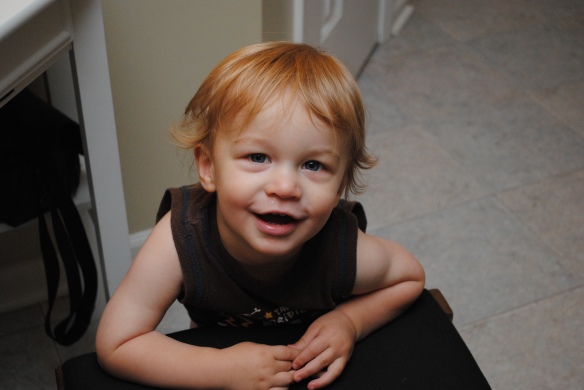 1. The hair is getting longer. We haven’t cut it since Christmas, and it’s flipping, curling, poofing… I love it!

2. Moo-moo. Baa-baa. Harrison is getting great with animal names and sounds. He has always been in love with dogs, but his favorite is “Puppies!” “Puppies?”  “Puppies.”. He names doggie/puppy, cat, horse, cow, bear, tiger, sheep, and duck. He knows the sounds for all of those plus elephant. Oddly enough, he can’t say “elephant” ;).

3. Harrison loves playing games. The cutest is when he goes into his closet or backs into the bathroom downstairs saying, “Shh. Shh.”. He sometimes waits for us to ask, “Where’s Harrison?”, but most of the time, he can hardly contain himself and just runs out of the closet/bathroom laughing and yelling. 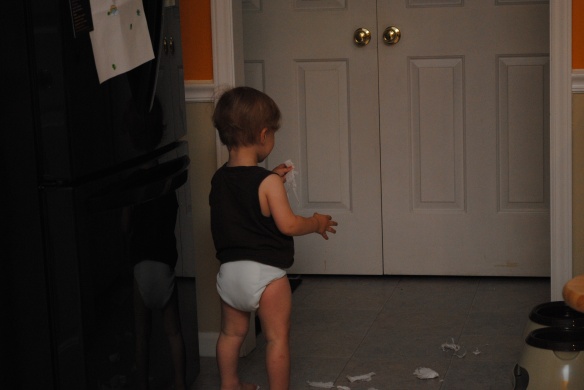 I get a lot of this. Making a mess to clean it up.

5. Paci-free. All pictures in the past 5 weeks have been paci-free. I guess you could say that was true for a while since Harrison had only been getting a pacifier when he was asleep, but it has been gone permanently for 5 weeks. Fortunately, it was a smooth transition. He had it way longer than he needed. I think we needed it more than him. He would chuck it most of the time or immediately say, “Here go” and hand it to us in the morning or after nap. He talks a bit more sometimes before falling asleep or wakes up a little earlier in the morning, but that’s okay.

6. Morning runs. Not really a milestone, but Harrison loves going on runs with his daddy in the mornings. Here’s a little shot of him ready to go. 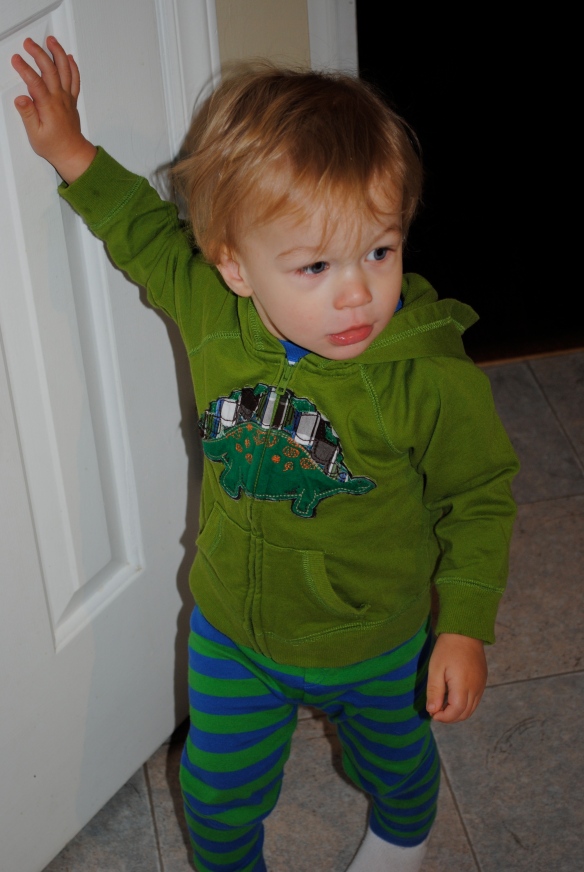 7. Book worm. Harrison loves climbing into chairs and sitting there with his stuffed animals and a book. It’s really cute when he mimics words and actions that we use in the book. He likes, Happy Dog, Sad Dog and Oops!

8. Harrison is very into body parts and naming them. Here he is smooshing my mouth.

I couldn’t believe when David told me Harrison’s next appointment wasn’t until he turned 2. I’m use to appointments every 2 or 3 months, and now he doesn’t go for another  6 months. How will I know how tall he is or how much he weighs?!

Here’s one last shot. I couldn’t resist. The shirt reads a little too true. 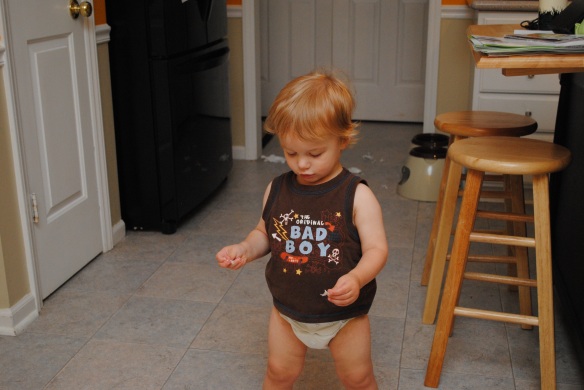 Making a mess is our new "thing"

A few weeks ago, I posted about Harrison’s 6-month check up and how big he was. Well, I’m back for another update on little man and all the latest developments.

Harrison has come such a long way, and it continues to be an exciting adventure. We can’t wait to see what he does in the next few months, or weeks.